I’ve been terrible about keeping up with my FOs! I don’t have very good lighting in my house so I can only take pictures of my projects during certain times of the day. I’d love to have a lighting set-up eventually, but for now I have to limit my photo shoots to the few precious hours when the sunlight pours in through my living room windows.

But I finally have the pictures to prove that I’ve been working hard on my projects, even if I haven’t been posting them as often as I should. A couple of these have been in progress for quite a while, regrettably, but I made the rest within the past week or so.

Let’s start with the oldest first!

I started working on these crocheted Lightsaber hilts ages ago for my Pathfinder group. We used to get together every other week to geek out and fight orcs, trolls, and necromancers, so I thought it would be neat to crochet a little nerdy something for each of our members. Unfortunately, we haven’t had the time to play for a long while, so I decided to scrap the project. I kept the ones that I finished for myself and T, but I neglected to weave in the ends or sew on the buttons until recently. It’s a shame too because now that I’ve finished them, I love them so much! 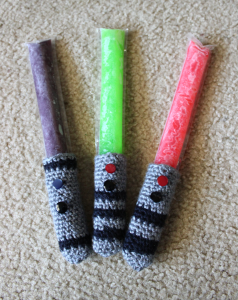 It’s the perfect time for lounging around outside with a popsicle in hand since the weather has warmed up. And don’t these look just perfect with the popsicles inside!? T and I can’t help having a impromptu battle every time we eat one now. Because we’re the coolest kids at the party.

My brother developed a bit of an obsession with Kylo Ren after we went to see The Force Awakens together. I’m thinking about making him a little replica of Ren’s Lightsaber, complete with the crossguard beams. It’ll take a little bit of alteration to make it work, but I’ll make a post about it, if I can manage it. 🙂

For those of you who want to make your own popsicle hilts, this pattern is available on Ravelry. It was free when I first found it, but the pattern author has since started charging for it. It’s only 99 cents though so if you don’t mind paying for patterns, it’s pretty cheap as far as that goes.

This next project has been sitting in my Ravelry queue since my early crocheting days. I hate that it’s taken me this long to finally make them because they were so easy, and they’re actually a handy thing to have around. Coffee cup cozies! (Modeled on Solo cups because I don’t have any of those cardboard to-go cups!) 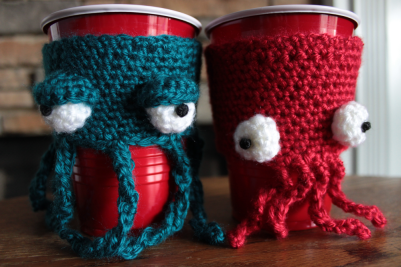 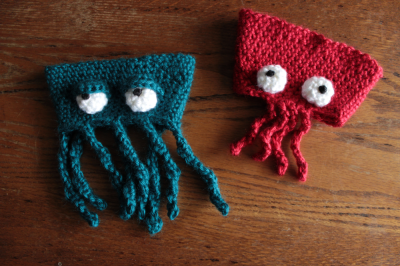 The cozy on the left was designed by Twinkie Chan, whose cute patterns almost single-handedly convinced me to start crocheting. The one on the left was made for me; the one on the right is an alteration I made for T. It’s supposed to look like Zoidberg from Futurama, but it came out a little wonky. I think that I’m going to try writing a pattern for an actual Zoidberg cozy so that I can fix the mouth tentacles and add the rest of his face.

(This pattern is free on Twinkie Chan’s blog.) 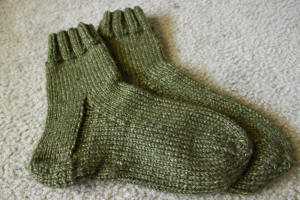 Last but not least, I managed to finish these humongous socks for my dad! These were my first human-sized socks. It may have been a mistake to make my first socks for my dad just because the size was overwhelming. I’ll just stick to making them for me and other people with a less Hobbit-like foot size. XD

(The pattern for these socks is free and can be found here.)

Do you have any projects fresh off the needles/hook? I’d love to hear about them in the comments! Thanks for reading! 😀